We use cookies on our website. They help us get to know you a little and how you use our website. This helps us provide a more valuable and tailored experience for you and others.

You can revoke cookies at anytime at the bottom of the page.

Large-scale displays are generating a buzz at this year's event, and with a busy education theatre running Solar Talks throughout the day, The Big 5 Solar at Dubai World Trade Centre is the ultimate showcase of a growing photovoltaic (PV) market.

Displaying what looks to be a fully functioning solar farm - flat photovoltaic panels, three rows deep and rotating - the Back 2 Back Distribution stand has also been drawing in crowds throughout The Big 5 Solar event this week.

“Having a product on display of this size, that is moving, is getting the attention of everyone that walks by which is great. Everyone is loving it, so far we have had customers who are very interested in integrating this system”, says Yashas Mahtani Daswani – Solar Engineer at Back 2 Back Distribution, in partnership with Almaden.

The solar tracking system on display is being launched at The Big 5 Solar this year, and can boast to having 30% more efficiency than traditional, fixed solar panel solutions. Daswani explains that “with a normal solar panel when you have it flat on the roof, the sun moves but the panel just stays steady. So in a normal day you have approximately 6 hours, but with this tracking system you can double the amount of hours during which you generate power.”

Commenting on the traffic of visitors from the GCC to their stand, Product Development Manager of S-5! Nik Holley remarks that “PV in the region seems to be really sparked, like an exciting interest where it seems new, where everybody is trying to figure out how to become a part of it, there’s a lot of excitement surrounding the solar industry here.” The company specialize in fixing solar panels onto metal surfaces, and forecast that building with metal is a fundamental choice in facilitating rooftop solar.

“Solar technology is developing quickly, and is providing visitors to The Big 5 Solar with a huge variety of solutions and applications.” She adds, “Rooftop solar and off-grid solar solutions are extremely interesting, and it seems the next “big thing” will probably be the implementation of building integrated photovoltaics (BIPV) solutions in the GCC.”

Discussing BIPV, Sales Manager for Sunman Basem Abdullah, poses the scenario: “Let’s say you built your design with traditional PV solutions, you are limited to only generating power on the roof. Now, architects are being given the free hand to use solar technology any way they want, and by mounting solar vertically you are increasing your generation capabilities.” Sunman are another example of flexible solar technology on display at the event.

Still yet to speak in the Solar Talks, Chief Commercial Office for BIPVco Justin Canning looks forward to later today examining how best to use building fabric to generate energy. He tells us that “The Big 5 Solar comes at a great time for BIPV. Only now do we have the technology and commercial imperative to properly partner construction products with renewable energy production.”

There is still one day left to visit The Big 5 Solar and to be a part of generating a renewable future. CPD (continued professional development) certified Solar Talks covering ‘Solar Energy Storage’, ‘Solar Desalination’ and ‘The Evolution and Prospects of Dubai’s Solar PV Market’ are still to take place.

Organised by dmg events Middle East, Asia & Africa, The Big 5 Solar 2017 is co-located at Dubai World Trade Centre with The Big 5 – the largest, most influential and renowned construction industry event in the Middle East.

To know more about the event, www.thebig5solar.ae 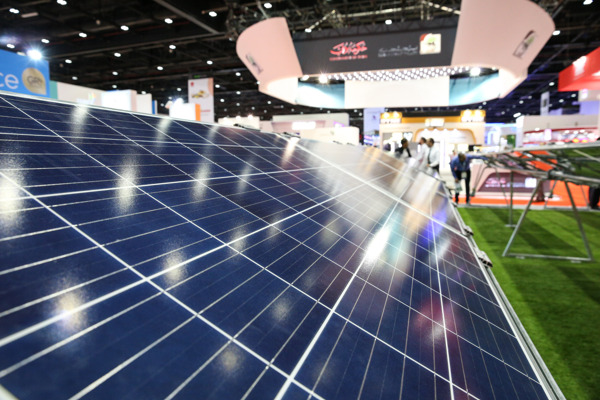 About The Big 5 Solar

Middle East’s only dedicated platform for solar solutions in construction

As part of The Big 5, the third edition of The Big 5 Solar brings solar solutions to construction. Showcasing solar technologies from leading PV manufacturing countries, The Big 5 Solar 2020 is a premier event for solar industry professionals to network, learn and do business in the Middle East.

More than just an exhibition, the free to attend Solar Talks will explore the present and future of solar technologies in the region to complement the exhibition’s offering.

dmg events is a leading organiser of face-to-face events and a publisher of trade magazines.

We aim to keep businesses informed and connect them with relevant communities to create vibrant marketplaces and to accelerate their business through face-to-face events.

dmg events organises more than 80 events across 25 countries, attracting over 425,000 attendees and delegates every year. The company’s portfolio of products includes many industry-leading events in the energy, construction, hospitality & design, coatings and transportation sectors. ADIPEC, The Big 5, Gastech, EGYPS, The Hotel Show and INDEX are the company’s flagship events. For more information visit www.dmgevents.com.

Founded in 1989, the company is headquartered in Dubai, UAE, and is a wholly-owned subsidiary of the Daily Mail and General Trust plc (DMGT, www.dmgt.co.uk), one of the largest media companies in the United Kingdom.